It is one of our active project to monitor the China origin ELF DDoS’er malware threat. The growth is very rapid nowadays, MMD detected 5 variants is active under almost 15 panels scattered in China network. I am quite active in supporting the team members of this project, so recently almost everyday I reverse ELF files between 5-10 binaries. They are not aiming servers with x32 or x64 architecture but the router devices that runs on Linux too. In some cases I found the FreeBSD variant.

In this story I faced an ARM architecture binary, which I found it interesting so I decided to share it here. The reason is because, practically: it was designed to work in ARM router with minimizing a well-known Linux/Elknot functions/features, that I previously posted in —>[-1-] [-2-] [-3-] [-4-] [-5-] [-6-], to specifically infect ARM (router) devices, and this binary is trying to convince that it is a WindowsHelp binary 😀 , and ,specifically: from my reverse engineering point of view, ARM & “thumb” assembly are interesting.
Why I know it is aiming for router is because, the way to use internet to connect directly to remote global IP, the method used to grab data using specific location in the embedded device, and the trace of sources used during the compilation of the malware itself.

As usual, China actor(s) serves their malware binary under “specific panel”, and this binary is spotted among with other Linux/Elknots malware. So as you can see it was served from Sept 10th and is having 4 downloads (including me, one time)

Well, we know is an ARM binary, but I need more information, so I check the ELF composition:

Now it’s time for calculating the data, we know the size and we see the each LOAD headers size which is just unfit, further, I don’t see any section (either dynamic or static) nor relocation data that I can expect from an ARM ELF (they should have more symbols), which is strange. This a sign of protection, someone want to hide something, in the end that person is hiding EVERYTHING which ending up to be very suspicious 🙂 – So the binary could be packed or encrypted protection, we have many possibility.

Let’s check, I went to the EP point (0x2f118) and start to do the stuff I usually do, with noted..we have to be very patient with the ARM or THUMB assembly since they have larger steps for simple operation than Intel processor.

..following the registers value and in r1 we will find the value that can tell what is happening:

This value may ring your bells too :). ok this ELF is protected, with/for what? I look from its DCB data from where it was called and clarifying the answer:

Oh, silly me.. it is a UPX, but, is it common and not modded one? So I went back to check the hex snapshot, to confirm..

Since I know that some moronz is really watching this blog too. I don’t want to be specific on this, but from reading the hex above we can recognize the originality of this UPX, which it is. Otherwise you have patch it to depack, sample a way to depack the custom UPX is in here–>[LINK]. Further.. as this is the common UPX, and the “U” stands for universal & we can do “universal” solution too to unpack 🙂

So now we have the bigger file size 😀
This time let’s check the composition again:

Good! the true EP is shown now. And we have the new program headers too:

A quick calculation of the size above shows that at least we have accuracy to more than 80% to the actual size now, good enough. It showed we have unprotected/unpacked data and so I can expect good material to disassembly it, but firstly, let’s dump the sections to be sure that we have no more encryption/protection:

all are there!)) So after small additional confirmation, these are the section I picked to start analysis:

To verdict its malicious process by reverse engineering

I will go to the reversing highlights, meanings..the most important process only. I don’t write the sub functions, i.e. how it grabs the ethernet data, or how this malware use socket to connect an IP, for example, since the code is too long. But to be noted, since ARM architecture has different structure than Intel, and ARM is designed for the embedded systems, you will see many different method for the detail operation that is involving with the system calls.
OK, here are the highlights that I would like to cover;

Malware changes attribute & chmod the crontab, this is a bit specific setup that rarely found in the previous Elknot type, suggesting a new built, previously most of them are aiming autostart at the xinetd for autostart installation.

Adding the autostart entry in it:

Create the file: “/etc/.mysys”, which later on found as the self copy attempt.

2. Initiation of the service… which lead to CNC information 🙂

We’ll see 3 thread will be spawned, which using “/dev/null” as value, this is typical MO for most types of Linux/Elknot.I saw.

..following with “effortS” to start the service:

To connect to “something”. I trailed it to get all variables needed:

And the destination 0x09E68 there is the IP address of this connection.

..well, I am not surprised.

Continuing the data flow started above, I end-up facing an interesting data:

This is just unbelievable, seeking further to figure what is this, I found the complete set of data for this “fake process” which is a self explanatory: 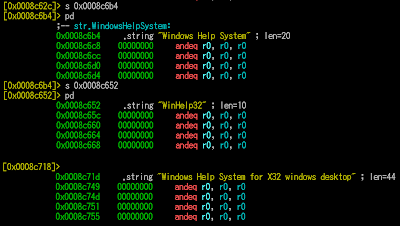 I don’t know what to say about this..

4. PoC of backdoor and sending sensitive data to remote host:

It’s self explanatory in the codes below, the BackConnect part:

And the trace of information to be sent to remote:

This is the function to be called when performing DoS by HTTP, I pasted it here as PoC of DDoS’er, please bear the length:

The detection ratio is very low, like..ZERO. Here’s the evidence, please click to enlarge the image:

This post is a proof of concept that routers is aimed by the malware actors for many reasons, and one of the main reason is because they are widely used all over the internet with having the global IP address. For the crooks who are behind this post, owning many routers means having power of an “army of DoS bots” than can be powerful tool for an attack. We saw not only ARM architecture, but MIPS, MIPSEL, SuperH binaries are also spotted in the wild.

I am adding these project’s sample in kernel mode, Will add the link shortly in here, please stay tune, I must clean up all of the garbage I made first. This is the link–>[HERE]

It is up to you to defend your own router. As you can see no AV can detect these malware, it’s over a week being there now. Please check your router user interface, make sure you are using the latest updates/firmware and make sure that your setting is correct and unchanged. Being skeptical during checking your router/gateway layer is very recommendable, and if you find anything unusual/suspicious please analyze it WHY and try not to let it go until you find a satisfactory answer for it. If you find it work and having no problem, backup the setting and save it right away.

The Intel x32 edition of this variant just was just spotted, analysis is here–>[LINK] <<– you can see more details on source, compatibility, compilation etc.

This is a warning of the true fact & evidence that the recent ELF malware coders are not only aiming x32 or x64 servers anymore, but routers too.

Why SOHO routers are aimed for malware infection?

As an illustration, ISE shows a matrix of vulnerability vectors for the evaluated known routers: 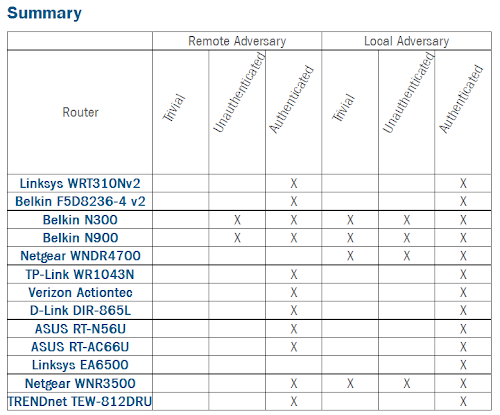 This shows us there is a weak security vector is aimed in SOHO router layer, and most of the houses & SOHO business are connected in the internet through these xDSL routers. We can not under-estimated the current volume of these routers, being up and alive in internet now. Maybe there’s only a low percentage of alive routers are having the vulnerabilities mentioned, but please imagine how powerful a DDoS attack will be if a bad actor is successfully gaining access to control, say, 1% of overall alive xDSL SOHO routers. And please think what if your house or office routers are unknowingly participated into a DDoS or other attacks against a certain banks or a specific country in the world?

Among of the attackers we detected so far, China’s bad actors are the most aggressive one. If the bad actors in China think that MMD won’t do anything about their evil action, they can start to cry now, we tango’ed 25 29 ELF malware download panels panels (the counting is still rolling) as per announced below: